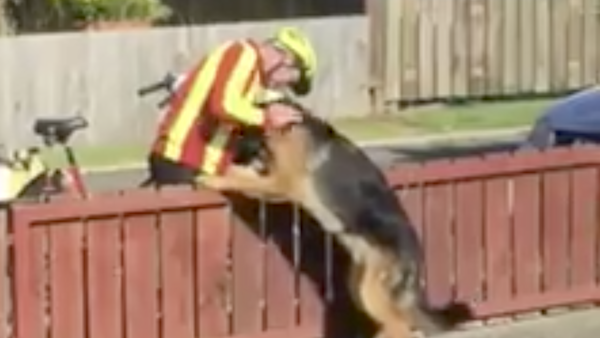 Just like with people, it’s easy to look at a dog and judge a book by its cover. Some believe all small, fluffy dogs are the friendliest pooches on the block, but in reality, many of them are capable of yipping and barking until your ears ring. Meanwhile, some of the bigger, more intimidating looking pups are the most welcoming, loyal and friendly K9s you could ever hope to encounter.

This notion isn’t lost on New Zealand resident Michael Collins, the owner of a sizeable, nine-month old German Shepherd that is often ignored by those who walk by his yard. Collins theorizes that those who pass-by view his dog as “unapproachable,” even though he is anything but.

Well, there is at least one person who has an open heart for this beautiful Shepherd – a mailman that continuously shows him some love, even if there isn’t any mail to be delivered.

Explained Collins on Facebook: “Just want to share something cool! Everyday whether or not we have mail this mailman always stops to see my dog who is only nine months old. He always gets over looked as a dangerous or unapproachable dog, maybe cause he’s big I am not sure. He doesn’t bark at them or growl (Maybe the odd couple times he barks at people but which dog doesn’t) but this guy here always makes an effort to get off his bike to give him a hug and a pat! I’m not sure who to tag on Facebook for him to see this! But thanks man, keep up the good job and you’ve definitely got a friend waiting for ya!!”

Here’s a look at the warm and fuzzy encounter: