Joy Watch: The Grandpa Who Made a Backyard Disneyland 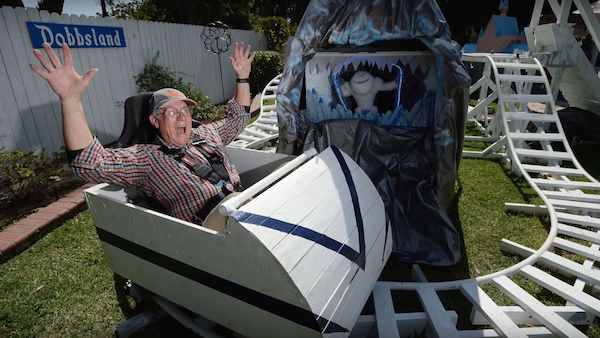 Grandparents are the best, aren’t they? Apart from having so much wisdom, memories and perspective to pass along, some of them also know exactly how to make their grandchildrens’ lives as fun as possible.

The latest example of this is Steve Dobbs, a 68-year-old Fullerton, California, grandfather who turned his backyard into a Disneyland-inspired amusement park for his grandchildren.

At first, the backyard just featured a mini-train track and carts that his grandchildren could ride around. Quickly, however, that activity became boring to the kids.

“My younger grandkids are nuts about Disneyland,” said Dobbs during an interview with The Orange County Register. “I wanted to give them a reason to come over to my house to spend time with me, and Disneyland is tough to compete with.”

Known as ‘Dobbsland,’ the park cost $6,500 to create and was primarily constructed by Dobbs, a Professor at the California State Polytechnic University, Pomona. Meanwhile, his students helped craft the rollercoaster.

Here’s a look at ‘Dobbsland’ in action:

This entry was posted in Uncategorized and tagged disneyland, grandpa, grandparents, Joy Watch. Bookmark the permalink.
Help with channel finder