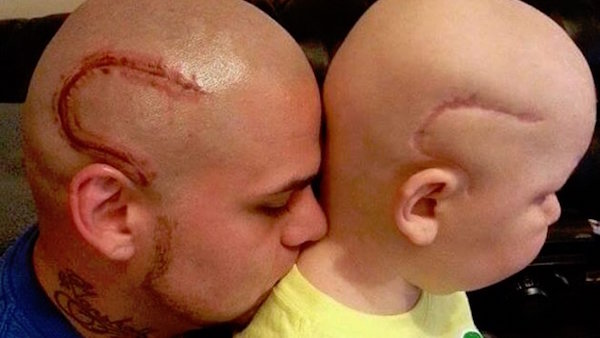 Joy Factor is a new Joytv.ca feature that celebrates moments that will bring a smile to your face! Be it an uplifting news item, a funny viral video, or an instance where good emerges out of bad situation, Joy Factor strives to shine a light on the best this world has to offer.

A great parent has the ability to ensure that their child always, always feels secure, loved and supported no matter what happens. Fortunately, many parents are this way, but then there are ones like Josh Marshall who take parental greatness to a whole new level.

In March 2015, Josh’s now eight-year-old son, Gabriel, was diagnosed with a form of cancer known as anaplastic astrocytoma, a rare malignant brain tumor. Gabriel underwent surgery to have the tumor removed, but was left with a sizeable scar on his head. In a Facebook post, Gabriel’s mother, Bethany Shultz, explained that the scar made her son feel “self-conscious.”

To help that self-consciousness dissipate, Josh got a tattoo of Gabriel’s scar on his head. As you can tell by the photo above, the tattoo artist did an incredible job of making the scar look very authentic.

“I told [Gabriel] if people wanted to stare, they could stare at both of us,” commented Josh during an interview with BuzzFeed.

A photo of Gabriel and Josh was subsequently entered in the St. Baldrick’s Foundation’s #BestBaldDad Father’s Day photo competition. The contest was open to dads, uncles and grandfathers who chopped off all their hair in order to support a child who has cancer. Gabriel and Josh won the competition and have become popularized online as a result.

“It just started as a friendly competition for Father’s Day and then it just blew up. It’s really weird,” said Josh while in conversation with The Huffington Post. “But it’s raising awareness for childhood cancer, and that’s all that really matters.”

“I would like to thank everyone for helping make this happen it’s an honor to be titled 2016’s ‪#‎BestBaldDad, but the truth is I’m no better then any of the other contestants,” wrote Josh on Facebook. “We are all great fathers that would go to any extent to help our children, so in my eyes we’re all winners! Hope you all have a great week and a happy father’s day to all you men making a difference in your children’s lives!”